Worried about clipping? Don’t be. 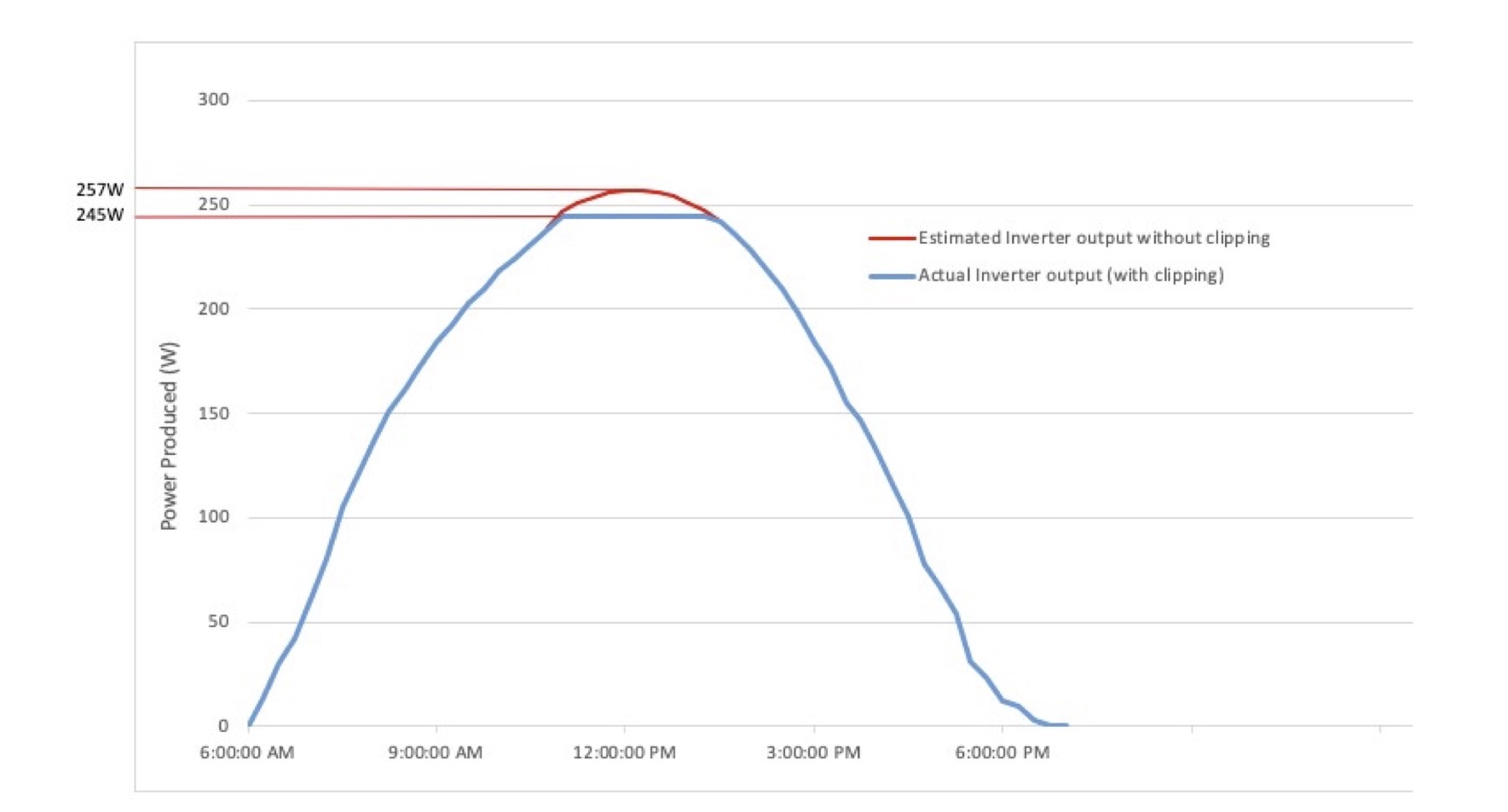 One of the most common questions we get asked at AC Solar Warehouse is about ‘clipping’ on microinverters, and how to best match microinverters and solar modules to avoid this.

Clipping refers to the situation where the AC power output of an inverter is limited due to the peak rating of the inverter, even though additional power may still be available from the solar module/s. This phenomenon occurs with both string inverter and microinverter systems. While the discussion here refers specifically to microinverters, many of the same principles apply to string inverters.  In practice, clipping results in the top of the daily AC output sine wave being flattened off as shown in the image above.

PV system designers can avoid clipping by sizing the microinverter such that it’s output rating exceeds the highest expected output power from the solar module, taking into account the conversion efficiency of the inverter.

As an example, if a module has an STC (theoretical) rating of 300W, a designer may determine that the highest likely DC output power from the module in a particular situation (taking into account location, orientation, azimuth, shading, soiling, etc.) is actually 90% of this rating, or 270W. If we assume a typical microinverter efficiency of 96.5%, then the designer would need to select a microinverter with a peak AC output rating of at least 260W to avoid clipping of the output under maximum output conditions.

So in an ideal world where cost is not a factor, this designer would in this example select an inverter with and output rating of 260W or greater.

However, we do not live in an ideal world. Microinverters typically cost between 40c and 50c per watt and choosing a microinverter based on this simple approach can often result in a system that is technically ideal but less financially attractive.

In reality, microinverters spend a very small proportion of their life operating at ‘peak conditions’ and the best overall return on investment for the solar system can often be achieved by selecting a microinverter that is in fact smaller than calculated in the simple exercise above. There is no point paying for relatively expensive inverter capacity that will only ever be used for a small amount of time, if at all.

The graph shown above is from a system with a high quality 300W module and an Enphase IQ7 microinverter that has a peak AC output capability of 245W. This equates to an oversizing ratio of 122%. The image shows data for the one day of the year that was found to have the largest amount of clipping. The clipping appears to reduce the potential output of the module by approximately 12 watts during the middle of the day, however numerically the actual energy lost on this day can be calculated to be approximately 19.9Wh, or 1.01% of the total energy generated.

Analysing the actual data for this system shows that some amount of clipping occurs for approximately 6 months of the year, and that the total amount of energy lost due to clipping throughout a whole year (assuming ideal solar conditions for the full 6 month period) is approximately 3760Wh.

If we assume the energy from the solar system is being used to offset energy purchased from a utility at $0.25/kWh then the value of all of the energy lost due to clipping over a year is 94 cents per module. (or $18.8 per year on a typical 20 panel, 6kW system).

So although the clipping shown in the image above may look concerning to a system designer or owner, it is in fact inconsequential to the overall performance of the system.

More importantly, selecting a larger inverter to ensure no clipping occurs at all can often increase the capital cost of the system by an amount significantly more than the value of the extra energy that is harvested – meaning that the overall return on investment for the solar system is worse for a system with no clipping than for a system with a small amount of clipping as in our example above. (i.e. the law of diminishing returns is at play)

The amount of clipping on any given solar module will depend on the module/inverter oversizing ratio. The specific orientation of the module, and it’s location (in particular the latitude).

There is obviously no benefit in selecting microinverters that increase the capital cost of a system by $30 per module in order to harvest an extra 94 cents of electricity from each module each year. This extra investment would take 32 years to pay back!

AC Solar Warehouse provides our customers with practical and reliable engineering advice relating to AC solar system design and installation based on many years of experience within the industry. We are very happy to assist system designers with AC Solar system component selection to ensure optimum technical and economic system performance.